40.2 While considerable data already exist, as the various sectoral chapters of Agenda 21 indicate, more and different types of data need to be collected, at the local, provincial, national and international levels, indicating the status and trends of the planet's ecosystem, natural resource, pollution and socio-economic variables. The gap in the availability, quality, coherence, standardization and accessibility of data between the developed and the developing world has been increasing, seriously impairing the capacities of countries to make informed decisions concerning environment and development. 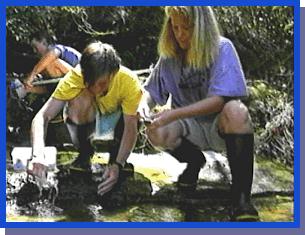 In the Pacific islands, community researchers could, but do not yet, make a serious contribution to Agenda 21's vision. At present, Communities are not, for example, involved in water assessment and conservation activities. The government and the people generally feel that water supply and resource protection is strictly a government function. This leads to conflict where the government does not have the co-operation of the people in conserving water, maintaining supply systems, or protecting water resources from contamination.

Water quality measurements are neither complex nor expensive. The major difficulty is the limited number of people who are trained to take them and the difficulty and expense of travel throughout the scattered islands to measure rivers and streams. These problems have been overcome in Australia and parts of the United States and New Zealand, by encouraging school students or other public groups to take water quality measurements. There are kits available, and widely used in Australia, New Zealand and the United States, to allow school students to do the basic water quality testing and ascertain the health of their river or creek. Some tests require adding chemicals to the water to determine phosphate or nitrate levels. Other tests determine physical conditions of the water with simple observations. For example, turbidity, or the amount of silt suspended in the water, is done using a very simple device called a secci disk. It is lowered into the water until it can't be seen from the surface and the depth measured from the length of string or stick used to lower the disk (in shallow streams this is done with a horizontal disk and a small mirror).

A new technique permits measuring sewage pollution using a small stick that is dipped into the water and kept at a constant temperature for a set length of time. It changes color if there is fecal material in the water. More commonly, sewage contamination is measured by filtering the water through a very fine filter that also contains food for the bacteria. The filter disk is then placed into a small electric oven that keeps it at exactly 30 degrees Centigrade. After 24 hours the any fecal bacteria have grown into little iridescent green colonies. These are counted as an index of pollution.

A High School Student samples for insects as part of the Australian Streamwatch programme.

Perhaps the best water quality test, and the most interesting for the people doing the testing, is collection of the plants and animals that live in the stream. The kinds of plants and animals are different depending on the quality of the water. Some water insects, for example, only live in clean, unpolluted water while others thrive in polluted water.

By testing in rivers all over the world, specialists have devised a way of scoring water quality based on insects and algae found in the streams. Anyone can do the testing with some training and basic equipment.

Australia has mobilized one of the most extensive and successful water assessment and monitoring programs in the world. Every Australian State has partnerships with volunteer groups and a Commonwealth has a "Waterwatch" programme to co-ordinate information and activities between the state volunteer organizations. In 1995, more than 20,000 Australians sampled streams, rivers and lakes all around the Nation. In one week they created a co-ordinated image of the state of the nation’s waters. Schools, fishing, boating, canoe and kayak clubs, rotary and lions clubs, all work together in the Waterwatch network. Data collected by the more than 2000 volunteer groups is integrated on Internet.

When the students find a water pollution problem (and they do) they immediately notify the water authority and in a number of cases have actually forced polluters in their community to stop polluting - all without legal complications or expense to the water authority (Ramsay, Sydney Water Corporation Streamwatch programme, personal communication 1997).

Farmers in Australia and New Zealand have participated in intensive research into soil salinisation and agricultural production in association with government agencies. Thousands of people contribute to weather data statistics in countries all over the world. Volunteer Landcare groups work with governments on a wide range of erosion control research and replanting programs. New Zealand's volunteer programs to assist with forest park and reserve development are booked solid every year. New Zealand communities participate in extensive coastal dune care projects.

Schools of the Pacific Rainfall Climate Experiment (adapted from Postawko 1997)

130 Schools are participating with the Schools of the Pacific Rainfall Climate Experiment (SPaRCE), a programme of scientific investigations on climate change run by the University of Oklahoma. The co-operative field project involves elementary school, middle school, high school, college, and trade school students and teachers from various Pacific island and atoll nations. Students have the opportunity to "enhance their education by involvement in a hands-on, scientifically valid research program, in which the science of meteorology is presented in connection with its applications to technology, and the implications of climate change brought about by human activities is discussed as it applies to individuals and to society as a whole." (Postawko 1997)

The project sends each participating group 2 direct-read rain gauges, workbooks, a disposable camera, and a video taped lecture (for those schools that have electricity and the necessary equipment). The first video and workbook introduce the SPaRCE program and describe how to site the rain gauges and other meteorological equipment, and how to take daily measurements. Approximately every 2 months schools receive subsequent workbooks and videos on a variety of topics.

Videos are an effective means with which to demonstrate the use of basic meteorological instrumentation as well as hands-on activities and experiments. However, because of the limitations on electricity in many parts of the Pacific, workbooks have been developed to either accompany the videos or to be used as stand-alone material. The workbooks include simple exercises and experiments for the students, as well as questions to aid the teacher in leading classroom discussions.

Students make daily readings of rainfall, log their readings on the data sheet provided, and send their data back to the SPaRCE office at the University of Oklahoma on a monthly basis. As a few schools cannot even afford the monthly postage charges, postage coupons must be sent to some schools so that the data may be returned. The single-use camera sent to each school is used to document the rain gauge sites and take pictures of the school grounds and participants. The camera is returned to Oklahoma for developing and printing, with one set of prints used in the data archives and one set sent back to the students. The pictures are also used in the SPaRCE newsletter and on their World Wide Web site.

Once the rain gauges have been set up, and data have been received regularly for several months, students are sent a sling psychrometer to add relative humidity measurements to their daily routine. After another few months, students are then sent a maximum/minimum thermometer to complete their set of meteorological instrumentation. These particular measurements were chosen because the instrumentation is relatively inexpensive and easy to use, and because single daily measurements of rainfall and max/min temperature are useful in studying global climate and climate change.

Data received in Oklahoma are incorporated into the Comprehensive Pacific Rainfall Data Base, one of the major data bases in the Environmental Verification and Analysis Center (EVAC) within the College of Geosciences. In addition to the SPaRCE program, daily rainfall totals are obtained from the New Zealand Meteorological Service (NZ), the French Polynesian Meteorological Service (FrP), and from the National Climatic Data Center (US).

The program was carefully designed to require minimal training of participating teachers. While on-site instruction is certainly desirable, to require extensive training before allowing a teacher to participate in SPaRCE may discourage some otherwise qualified teachers from joining the program. Participation in SPaRCE is purely voluntary, and all interested teachers are invited to join.

There are currently 130 schools and technological centers participating in SPaRCE, representing the United States as well as countries across Polynesia, Micronesia, and Melanesia. Participants come from elementary and middle schools, high schools, trade schools, colleges and community colleges, in both the public and private sectors. In addition, the Meteorological Services in the Solomon Islands and Samoa are using the SPaRCE program as part of their training for new weather observers. The meteorological services of the various island nations have been very co-operative and have provided direct assistance to the students. Several have even provided additional rain gauges to the schools. Some meteorological services are incorporating the data into their own meteorological networks.

A key to the success of the SPaRCE program has been monthly question/answer sessions between the Oklahoma investigators and the Pacific participants through the PEACESAT (Pan-Pacific Communications and Education by Satellite) telecommunications facility, located on the campus of the University of Hawaii in Honolulu. One of the purposes of the monthly radio sessions is to answer questions by students and teachers about science concepts, about curricular material, or about the program. These radio sessions provide an exciting avenue for teachers and students to exchange information not only on how the program is being used in their classrooms, but equally important, to exchange information about their cultures and lifestyles. These exchanges help to emphasize the global nature of climate.

In addition to communication via PEACESAT, participants are sent a newsletter approximately 6 times per year. These newsletters feature new SPaRCE participants, letters and stories from old SPaRCE participants, frequently asked questions (about any aspect of science), and a report on a timely climate-related topic (e.g., a typically active hurricane season; El Nino; current state of the ozone hole; etc.). Students whose submissions are used in the newsletter are sent a SPaRCE tee-shirt.

The SPaRCE program allows teachers to increase the quality of their science education programs by bringing up-to-date information on climate and climate change into the classroom. By involving students in a real science program in which they make measurements of environmental parameters and share their data with scientists and students in other parts of the world, students become aware of their environment, and this awareness empowers them to make choices which will determine what kind of world will be left to future generations. "The SPaRCE program involves students in a technological program which teaches the scientific method, increases their awareness of their environment, and illustrates the need for a worldwide collective consensus to protect future life on Earth" (Postawko, S. 1997).