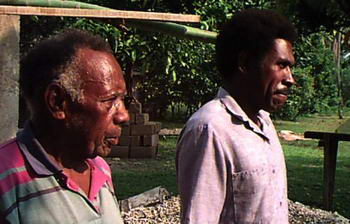 In 1991 the Enrel family of Uluveo Island in the Maskelynes, just south of Malekula Island, decided to set up a sanctuary for Giant Clams. They called it Ringi Te Suh Marine Conservation Reserve. Ringi Te Suh has two meanings; to leave something to multiply and to leave something alone. Enrel Simon Bong Masing was alarmed at the steady decline of sea creatures on the coral reefs of the Meskelynes Islands. The giant clams, in particular, were vanishing rapidly. Two species, Tridacna gigas and Tridacna derasa had already become locally extinct. On a visit to Fiji, he heard about giant clam sanctuaries and when he returned to Vanuatu he obtained a booklet from the Fisheries Department describing 12 steps to setting up a giant clam sanctuary.

Fish For Sunday By Jack Enrel

Today its Saturday again.
I have been out on the reef searching for fish. But the sea was emptied by those who catch but not consume.
I am tired and disappointed but I shall keep on trying in case I find one that escaped the cold coffin and missed the last flight to Port Vila.
Brother! Did you begin to wonder whether the fish would ever return?
It's painful to watch the fish disappear into the town and nothing is left
for Sunday.

The Enrel clan took action immediately, convincing the villagers to set aside a reef area of about one square kilometer for the clam reserve. They bought over 500 giant clams from local fishers and put them in the reserve.

In 1998 I visited Uliveo aboard the Research Vessel Moira. I had no idea that the clam reserve existed. 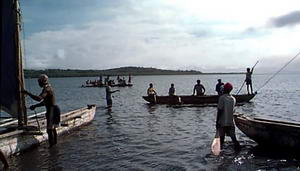 "There," said the boy, pointing at the man in the doorway. "Headmaster belong school."
Headmaster belong school was busy, talking to someone inside the small house on the outskirts of the village at Uliveo. I waited, looking at the dug out canoes pulled up on the mud bank, wondering if my dinghy would be left high and dry at low tide.
"Hello, I am Jack Enrel, headmaster of the school, how can…." He stopped with his mouth open looking fixedly at my chest.
I glanced down to see if there was a bug on me or perhaps a big glob of mud, and then I realized he was looking at my T-shirt with its big fat Tongan guy snorkeling and holding a small giant clam in one hand. A little balloon from his mouth says, in Tongan, "I'll put you here in the circle and nobody will harm you."
"Hi, my name is Richard, I've just arrived on that yacht and would like to have a look around."
"Have you come to see the giant clam sanctuary?" Jack asks, looking again at my T-shirt.
"You have a giant clam sanctuary here?" I ask.
"Oh yes, a very big one. More than 1,000 clams," he says proudly.
"1000 clams?" I am astonished. It is ten times as big as the one that I helped the Tongans create in Vava'u.
"Come, come and see," says Jack and we head off to the school at the end of the bay.

The school is quite large, larger than I would have suspected for such a small community. Jack's office is not much more than a cubbyhole - piled high with papers and books and things. He says, "My father has been worried for a long time about the marine life here. Every year he saw there were fewer fish and fewer clams. He knew something had to be done. In 1991 he went to Fiji and he heard about giant clam sanctuaries on the radio. When he came back, he stopped in Port Vila and asked Fisheries how he could set up a giant clam sanctuary here and they gave him this booklet." Jack holds up a little blue booklet entitled "12 Steps to More Giant Clams"

On the cover of the booklet is the same drawing Jack was gawking at on my T-shirt.
"How wonderful," I said laughing, "What a delightful surprise. I wrote that booklet, I am Dr. Richard Chesher. Nothing could make me happier than to know that you and your father have been successful in making your own village giant clam sanctuary."

Jack told me the history of the Ringi Te Suh Marine Reserve (the name has two meanings, to leave something alone and to leave something to multiply). It wasn't easy, setting up the reserve. There were both local and government opponents.

I had spent 5 years in Tonga trying to get the Tongans to set up their own sanctuary and although they did finally do it and although the sanctuary was a success (meaning nobody stole the clams and the clams did begin to re-populate the reefs with juveniles) the Tongans did not do it spontaneously. I organized a long series of Earthwatch volunteer teams and videos and meetings and contests and t-shirts (the origin of the one I was wearing) and newspaper articles and radio programs and magazine articles and experts and fisheries and the UN got involved as soon as the first clam sanctuaries had survived for a couple of years.

In Fiji, the Fisheries Department set up clam sanctuaries based on the Tongan model, but that was purely a government initiative. THIS was a spontaneous village initiative. And, Jack told me, they got no assistance - no money, not even expertise or helpful words of praise - from the UN or the South Pacific Regional Environment Programme or the Vanuatu government or any of the army of people who's professional careers are based on getting communities to look after their environment. In fact, a government environmentalist visited the sanctuary and wrote a NEGATIVE report saying the reserve did not have the full backing of everyone in the community. But, Jack explained, they now had a written mandate proving full cooperation of everyone. As if the clams themselves were not proof of that. 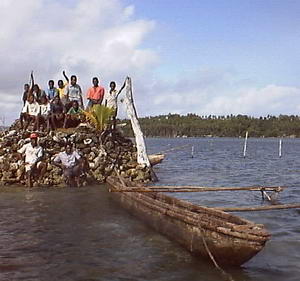 So Jack takes me to see the sanctuary.
And so all the kids come along.

It is east of Pellonk, on the huge reef flat;
a staked and fenced area of almost one square kilometer with deep pools lined with bright corals.

And kids, lots and lots of kids.

And clams, lots and lots of clams.

I see second and third generation clams while the children of countless generations of Maskelyne Islanders giggle and watch me admire them.
They smile and wave at my obvious pleasure and acknowledgement of what they have done.
The Ni-Vanuatu people often set areas aside for conservation - declare the reef or a species Taboo for a time. Enforced by the Big Men and Tradition.

But this is different, a new concept, a new approach, a permanent reserve, written down and agreed to by the whole community to enhance the survival of the sea creatures they need for food. 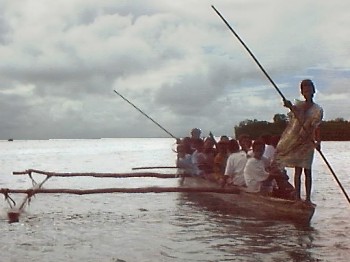 As I float over a cluster of Hippopus hippopus, the horseshoe clam, I am rewarded.

In 1984 I realized that for an environmental program to be a success it must change the behaviour of the people so there is a measureable improvement in the flora or fauna or other resource. I decided to see if this was possible using giant clams as the target resource.

Success would be measured by my floating on the surface of the sea and looking down to see at least 100 giant clams, put there and protected by the local people with little or no involvement of outsiders.

If you cruise by, go see them yourself.