Super Corals; Do the corals in Port Moselle Marina hold the key to the survival of coral reefs? 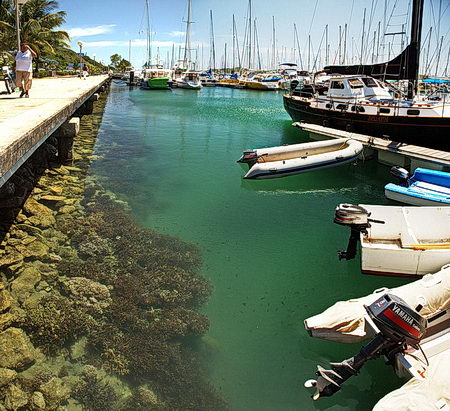 A coral reef fringing a municipal marina in downtown Noumea may hold the key to survival of coral reefs around the world. If you are a coral scientist specializing in coral symbionts this could be your chance to change the future of coral reefs.

Important scientific discoveries are often found where something unusual is happening that does not fit existing theories. Sometimes these discoveries are not far away in remote places but right in front of us, so unexpected their importance isn't recognized. The reef corals shown in the photo growing on the western shore of Port Moselle Marina are both unexpected and unexplained.

Coral scientists have documented the decline of coral reefs throughout the tropics from global warming, acidification, sedimentation, chemical and physical abuse. But the corals that thrive on the seawall in the interior of Port Moselle Marina defy all of these threats and more, surviving in conditions that other reef corals can't. 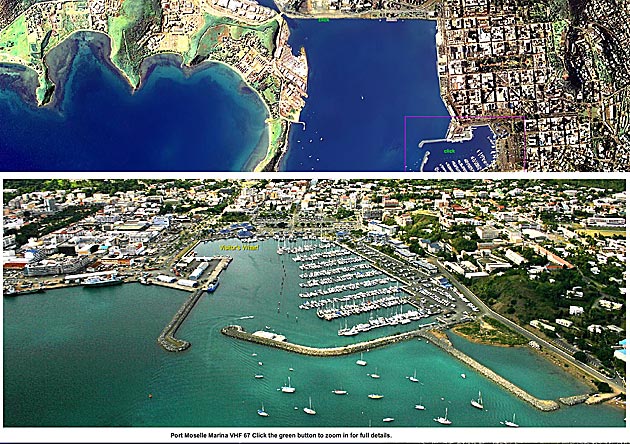 Port Moselle Marina was built in 1990 in downtown Noumea, in the SE corner of the busy commercial harbour called la Petite Rad. It is home to over 900 yachts and ships ranging in size from dinghies to fishing boats, tugs, and large passenger vessels. There is a fuel wharf on the western berm and Noumea's produce market and fish market on the eastern shore. Here is a Google Earth link to show you the marina.

As you can see from the above photo the marina is nearly completely enclosed by sea walls, leaving only a 46 meter wide entrance. This severely limits water circulation in the marina. If you think the water in the marina would be pretty stagnant and very polluted you would be right. In mid summer the water temperature soars above 32C and drops below 20C in the winter.

Municipal drains discharge into the enclosed basin with a constant flow of street drainage and sewage. When there is a heavy rain all the rainwater run-off dumps right into the harbor often with heavy sedimentation.

Cold rainwater can result in a rapid temperature drop during the summer months and then soar right back up to super hot with the change of tide.

Every morning and every afternoon workers hose down the fish and produce market and this also flows into the harbor.

Trash of every description, sometimes whole trash bins filled with garbage, gets dumped into the water from time to time. The marina has a special-built boat to clean up the floating trash when it becomes too offensive. 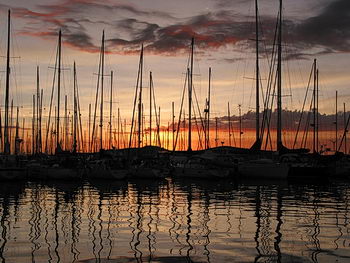 The marina has excellent toilet and shower facilities ashore and most people use them most of the time. But sometimes they use their onboard toilets and they all use their sinks to wash dishes and hands. The yacht owners also wash their boats from time to time. Noumea has a large nickel refinery that sometimes blasts black soot into the air. Yacht owners wash the black sticky fallout into the water. The fallout itself coats the sea surface with whatever comes out of the nickel refinery smoke stacks.

All the yachts, with or without live aboards, eject a variety of detergents, bleaches, paint thinners, bilge cleaners, oil, bilge water and toxic leachates from their bottom paints.

Marina workers sometimes spray herbicides on the sidewalks to kill grass and weeds that might grow in the cracks. The city sprays pesticides to kill mosquitos. All of these toxins wash off into the marina.

All in all, it is a lovely marina, well kept, professionally maintained, nice for people.

But would reef corals, those delicate, sensitive creatures of clear, clean water, those corals that are dying from global warming temperature shifts, silt, acidification, and physical abuse, survive exposure to the extremes of this urban environment?

Reef corals have survived in this marina for over 20 years: 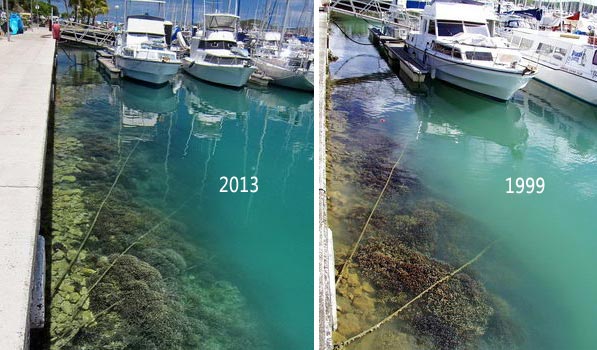 Corals began to settle in the marina within a year after construction ended and within two years the coral settlement was fairly thick on the southern shore of the marina. Above are two photos, taken 14 years apart, showing the continued survival of the corals in the marina. 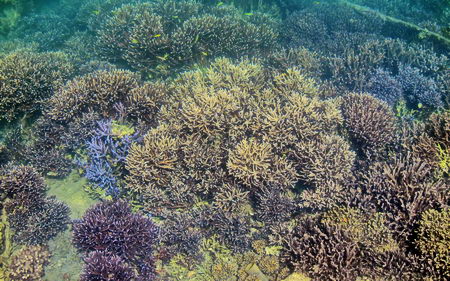 Kids throw rocks and sticks on top of them.

They are a constant source of amazement to tourists and residents who walk along the sea wall promenade looking down at the reef in the marina.

Acropora branching corals are the most common corals in Port Moselle, and there are several species represented. The coral branches are thin and fragile. Coral biologists have proven that mechanical breakage of corals, especially on reefs subjected to overloading of dissolved organics, results in a variety of diseases and algal overgrowth that kills the rest of the coral colony and often adjacent corals as well.

In the photo above you can see cyclone mooring lines from the yachts laid right through the delicate corals.

Every year, in October or November, every yacht in the marina has to test their cyclone mooring lines. The image on the left shows where a mooring line was pulled free of the corals, breaking all the coral branches.

Every year the coral thickets quickly recover from this abuse and no diseases spread to other colonies.

Corals are also sensitive to siltation, especially where the silt is loaded with chemicals from street run-off or construction activities. Here is a photo of a municipal street drain that discharges directly on top the Port Moselle super resistant corals. You can see colonies of Acropora very close to the pipe.

During construction of government buildings near to the marina, sediment containing silt laden with cement leachates and strong detergents flowed out of this pipe. The corals survived it.

There is a diversity of coral genera and species on the Port Moselle Marina reef.

This photo was taken from the sea wall right next to one of the municipal drain pipes. There are at least 4 different kinds of corals living there.

Nobody has done a detailed inventory of the coral genera or species in the marina reef but from the top of the sea wall I could clearly see colonies of Acropora, Porites,
Psammocora, Poicillopora and even Fungia.

There are 5 genera of corals in this image, the corals growing right at the base of the marina sea wall.

The diversity of corals indicates that the phenomenal resilience of the corals is not a characteristic of the coral cells but a shared super resistant zooxanthellae symbiont living in the coral tissues.

There are 7 genera of corals in this image taken from the sea wall.

Massive corals, branching corals, solitary corals, all have symbiotic zooxanthellae and the one they share in this stressful environment allows the corals to survive conditions that are known to have killed the same species in relatively pristine coral reef locations.

Why is this important and what can you do about it?

Coral reef scientists from around the world are seriously concerned with the future survival of coral reefs. Vast areas of coral reefs have died after being exposed to temperature extremes or conditions that the Port Moselle corals survive every year . When corals are exposed to extreme temperatures, salinity, UV radiation or other stresses the symbiotic balance between the coral cells and the zooxanthellae fails. The zooxanthellae stop producing oxygen and sugars and they stop utilizing the coral's physiological waste products. The symbionts then become parasites and the corals eject them from their tissues, causing the coral tissue to become transparent - a process called "Bleaching" because the coral's white calcium skeleton becomes visible

Kinzie et al (2001) present a good explanation of the coral reef problem and the role of zooxanthellae with extensive literature references in their review paper: "The Adaptive Bleaching Hypothesis: Experimental Tests of Critical Assumptions "

Corals can sometimes restock their zooxanthellae if the water temperature returns to normal quickly. But if the excessive temperatures continue for more than a few days the corals die (Toller et al 2001). Rob Rowan, from the University of Guam, suggests zooxanthellae adapted to high temperature environments might be introduced into corals undergoing a bleaching event, increasing the chance of survival of the corals and offering protection against future environmental stress (Rowan 2004)

The corals in Port Moselle Marina are already pre-adapted, ready to be integrated into a stock of super corals for rebuilding coral reefs or building artificial reefs. Or perhaps their symbionts can be cultured and used to help corals recover during coral bleaching events.

Or maybe the Port Mosselle marina corals would lose their resilience if transplanted. Or maybe their zooxanthellae would not survive in open water environments.

There are a lot of questions that need answering - but so far, nobody is trying to answer them.

Is anyone ready to get going?

Are you interested in investigating the amazing corals in Port Moselle Marina?

The study requires someone with a background in the ecology, taxonomy, genetics and physiology of coral symbionts. Comparisons of the symbionts need to be made between the Port Moselle Marina corals and the same species from pristine coral environments.

Are the Port Moselle symbionts simply acclimatized to the stressful conditions or are they genetically different?

How have the Port Moselle Marina symbionts overcome the temperature, salinity and UV breakdown of the photosynthetic cycle? A biochemist needs to investigate that.

Can the zooxanthellae be transplanted into corals that have ejected their symbionts following heat stress? This could be studied in laboratory conditions and later in field conditions.

There are lots of questions that need answering; lots of opportunities for dissertations and exciting discoveries.

There is a very important, a critical, need to find the answers with global implications.

There is an absolute 100% certainty that the corals in Port Moselle Marina are super resistant to environmental stresses that are deadly to other reef corals.

If you have expertise in any of the required fields now is the time to act.

Nothing guarantees that the corals will survive anything at all. They could be killed off and whatever adaptation they have developed could be lost.

It would not take long to get the samples you need - maybe 10 minutes from the time you arrived at Port Moselle Marina - 60 minutes after your airplane landed in New Caledonia. Maybe 8 minutes if you happen to be in Noumea now, sitting in your laboratory at IRD or the SPC or the University. You wouldn't even have to get into the water, you can reach the corals with a pole from the seawall.

A competent coral taxonomist could catalog the genera and species in two hours and do a photo transect of the reef at the same time.

Within a week you could have the first answers to the critical questions of how the corals survive and the role of the symbionts. By that time you'd have enough data for a dissertation or a publication.

Of course if you sit down and write out a research proposal and submit it to various potential funding sources all that could take you six months to a year. And maybe you wouldn't get the free ride.

What are you waiting for?